I had a great vacation with a group of wonderful women, with whom I could be my true self for a whole week. You may have read a snapshot of our convention on Meredith's site.  After two of these trips, it has only just occurred to me that before I joined the Beach Belles last year they used to get into all kinds of trouble. Tales of needing bail money and being rescued by hunky firemen come to mind. I hope I'm not cramping their style!

As I was going to be on the other side of the Pond for eight days, Harry decreed that I would be spanked on each of the eight days in the run up to my departure. He decided each one would have a different theme. You can probably tell that it would mostly be on the fun side.

So here it is, Sir Spankalot's fun and games.

Saturday: We'd had a busy Friday, no time to play, so the first of the eight was a 'Happy Weekend' spanking, held over from the previous day. That followed its usual course of a lot of fun and laughter, topped off with a few smacks with an implement as a reminder to keep calm.

Sunday: Ha, this is one of Harry's favourites. I came out of the bathroom fresh from the shower and slathered in body lotion. He was waiting for me, propped up against the headboard with a pile of pillows over his lap. Anyone familiar with being spanked on a wet bottom will know that it takes little effort on the spanker's part to raise a sting.

Monday: Was a surprise. We had just finished washing the dishes when he directed me over the kitchen table and produced the London Tanners' heavy leather paddle. It wasn't on the bare but it had me dancing!

Tuesday: We had a late night and I really didn't want a spanking, but refusing was not an option. Harry read my mood and kept it short and sweet. I was soon on my way to the land of Nod, tucked in under his arm.

Wednesday: He positioned me on the bed on all fours, chest down and bottom up, brandishing the horrid jam spoon. As soon as he ran his hand over my bottom, he realised  that implement would be too harsh on stretched skin, so used his hand instead, before moving on to other activities.

Thursday: Harry called me into the sitting room, where he was lying in wait on the sofa with a cushion over his lap. I had to remove my jeans and knickers but it was a sensual hand spanking that had me purring like a cat.

Friday: OTK in the bedroom. Harry started off with his hand but I soon felt the smooth wooden paddle circling my cheeks prior to a few ouchy spanks. As the circles began again, he said he bet I was glad he made that paddle for me. I told him I have a love/hate relationship with it. I love it because he made it and - Owww! - that's why I hate it.

Saturday: Last day! He had me sit on the side of the bed while he chose his toys. I was alarmed to see he'd pulled out the LT heavy paddle, the love/hate paddle and the horrid jam spoon. He was teasing me. After a nice long hand spanking, he gave me three taps with each of the implements and we were done.

Early the next morning I was heading for the beach.

I've had this post in draft for a few days, waiting to get some time to add photos. We're off to the West Country for a long weekend now, so I'm afraid this post will have to go unadorned.

Leavin' on a Jet Plane 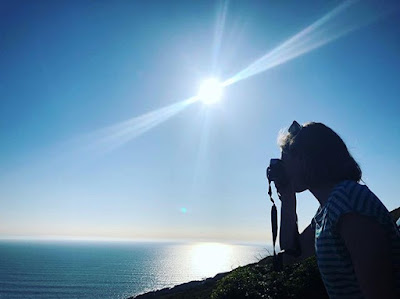 Gone to the beach...

Life has been crazy busy of late. Harry has been working all hours and, as well as trying to keep up with the business admin, I have had a lot of family commitments. There just haven't been enough hours in the day and we have both ended up exhausted by the time evening comes around.

Harry bounces back as soon as his eyes are open but I am not a morning person at the best of times. I have to come back into the world s-l-o-w-l-y and with at least two cups of coffee. If I don't get enough sleep I am not nice to know, grouchy just doesn't cover it. Harry has been very helpful on the worst days, either by using his magic sleeping aid (why do we sleep like babies after a spanking?) or sending me to bed early.

That's another of the many things I thought I would never write. When I first started reading blogs, I was astonished to find women being sent to bed by their husbands. There was no way I'd put up with that, absolutely not!

Unfortunately, Harry must have missed that memo because one night, not long after my first 'real' spanking, I was up late reading when he came into the room, saying I should go to bed; the next day was going to be busy and I needed my sleep. I said I'd just get to the end of the chapter first and carried on reading. It was a gripping book and, two chapters later, Harry came back and told me to go upstairs or I'd get a spanking. I protested that he couldn't do that, I'm not a child, and I would go to bed when I was ready and not before. I got spanked.


The following evening, as he was leaving for a late session at the local sports centre, Harry told me that as I'd had a long, tiring, day he wanted me to be in bed by the time he got home. That did not go down well, as you can imagine, and I was quite determined I was not going to comply. Much later, I was immersed in my book when my phone buzzed beside me with a text alert: "I'm just leaving, you have fifteen minutes." My resolve melted away and I dived into bed just as Harry drew up onto the drive. He knew I'd only just made it but he kissed me and said, "Good girl." I know some of you melt when you hear that but I loathe it, it makes me cringe. That amuses Harry, who uses it as a non-impact means of letting me know who's in charge.

I really struggled with the bed time issue and Harry was patient but unrelenting. The learning curve continued something like this:

I asked Harry if he recalled that first tussle. Laughing, he said he remembers me, hands on hips, full of indignation, quite convinced that sending me to bed was not within his remit. I remember the debate ending, with him calmly asking why I was still standing there arguing when I could be half way up the stairs!

He had a chuckle about the following evening too.

Thank you for the kind comments on my last post; sorry I took so long to respond.

We are still busy but it is manageable and we have been able to carve out some 'us' time. In theory, Harry works a four-day week but something usually comes up to put the mockers on that and Fridays become just another working day. Since the beginning of last month, though, he has been scrupulous in taking his day off and we have been enjoying lazy mornings, with no alarm going off at 5.45am. He has also reinstated 'Happy Weekend' meetings on Fridays. Those are mostly fun but a paddle usually makes an appearance at some point, for good measure.

At the beginning of May, we took my 90-year-old mother for a long weekend in the West Country, where we were joined by our elder daughter and her partner. We stayed in a swish hotel, perched above a beautiful beach that had been one of our favourites in the surfing years. Nowadays, it's our daughter and her partner who surf, whilst Harry looks on admiringly. The weather was glorious. 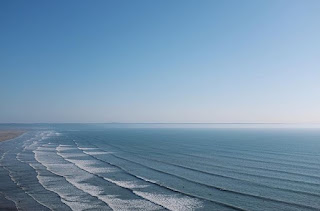 The week leading up to the break had been hectic and, as we had an early start to our getaway, Harry decided I needed a dose of his sleep-inducing medicine to ensure an uninterrupted slumber the night before. Yes, I slept like a baby. Having only been spanked a few hours ago, I was surprised to see him sitting on the side of the bed with a paddle beside him when I came out of the bathroom the next morning. Apparently, I needed a reminder to keep calm over the next few days. Despite that reminder, I somehow managed to annoy Harry with some sassy remarks on the second night of our stay. He didn't say anything, just clapped his hands. I was pretty slow realising he was conducting a noise test but he was really fast bending me over the end of the bed, delivering a hard and fast flurry of swats. He doesn't usually spank in hotels.

Since then, life has been uneventful and that's the way I like it. We took two weekend trips to our daughter's and her partner's cottage for more renovation work. It is nearly finished now and bears little resemblance to the near-wreck they took on. As usual, I accompanied our daughter on dog walking duties. The hedgerows and coastal areas are bursting with colour, as Mother Nature delivers her summer bounty. Not far from where this photo was taken is a small cove where seals come to bask on the rocks. We only saw one that morning, bobbing up and down in the shallows; the sun hadn't quite reached the rocks at that point. 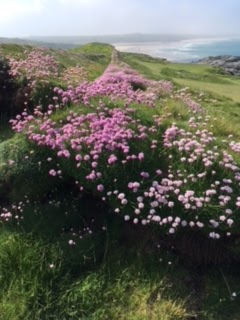 Harry has to work a few hours today but I can't complain, after last week's five days off in a row. He'll be back late afternoon for the Happy Weekend meeting...