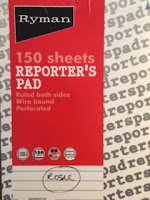 I have a notebook in which I write stories, outline my posts before drafting them online and jot down ideas for future posts. That last one is of little use because, by the time I get round to writing it, someone else has usually written on the same subject. Sometimes I write down those moments that make me think, "That's going in my blog!" The trouble with those is that they either don't fit any of the subject matter or the note is so cryptic that I can't remember what the heck it was about.

The notebook is getting really tatty so I decided to have a cull of all the loose pages and notes that I'm never going to use. Some of the short notes made me smile and, whilst none of them would make a post of its own, they might make amusing reading.

So, for your entertainment, here are some snippets from Rosie's notebook:

🌟I was brought up not to use profane or vulgar language, a constraint of which Harry heartily approves. Sometimes, though, a vulgar expression slips out, such as the time when we were having lunch in the garden and our cat pawed at me to get some of my bacon. He took me by surprise, causing me to drop my fork and use a very rude, though not profane, word. Harry chided me for the slip and I asked how come he can say it and I can't. His response was, "Because I'm the one who wields the paddle." I was taken aback by that because, at that time, spanking was strictly for fun. I had no premonition of how that was to change.

🌟On the same theme, Harry and I were sitting side by side on the sofa. I was reading and he was looking at funny cat videos on his phone. He showed me a picture of a very cross looking cat. This was recently, a couple of days after PK put up a TBT post on how she got her name and I told him a very short version of the story. I said she was pissed with her friend, who shot back a photo of a pissed looking kitty. Without looking away from his phone, he made a 'cut-off' gesture with his hand and said, "That's two, no more."

🌟Still with the bad language theme, there was a time when I borrowed Harry's car and took a corner too fast. I frightened myself silly and shouted out the F-word, one of only three times I've used it in my life. I was relieved that Harry had no occasion to review the dash-cam footage because it recorded sound as well as sight. Had he heard my language I wouldn't have sat for a week - and that would have been after the spanking for bad driving.

🌟I have no idea what this one was about! The note just said Harry held up a hand, making a spanking gesture, and said, "I'm the one with the slappy hand, I make the rules."

🌟Another note read 'Annoying - hand - itch'. I remember this event but not what I did to annoy Harry. Whatever it was, I stopped when he held up his spanking hand and scratched the palm with the index finger of the other hand.

🌟"I didn't say be dull, I just said behave." I earned that reprimand when were in the kitchen doing the dishes and I had been teasing Harry, a bit too close to the line.

🌟This is my favourite and I've saved it till last. Harry told me he had an event planned for the evening, called 'Red Globes At Sunset'. He then announced the warnings, as they do on television. "You are advised that there will be spanking and scenes of a sexual nature, but no bad language." It all came to pass exactly as planned.


Life may be stressful at times but it's rarely dull in Harry and Rosie land!

This post was supposed to be a short snapshot of an event last week but, as I was trying to make sense of my reaction, it seemed to take on a life of its own, reminding me of another struggle with submission a few years ago.

One morning last week, Harry and I both woke before the 5.45am alarm went off. We lay there, quietly savouring the few more minutes before the clamour of a new day intruded. When the alarm went off I kept my eyes closed but soon became aware that Harry was rearranging the bedding. I turned to see what he was up to - what was the fat bolster doing on the bed? There's only one reason for that and I was soon draped over the thing having my bottom tanned. Afterwards, there was a short question and answer session and the last of my answers was, "Yes."

I looked at him, puzzled.

Nooooo! Over five years in and he's never asked me to call him Sir before. I don't want to! I can't do it! I won't!

He smiled, recognising my inner struggle and letting the demand go. It had been a 'just because' spanking, no discipline involved. Maybe he was just teasing me.


As spanking just for fun morphed into ttwd all by itself we never had 'The Conversation', so there was no discussion on what would or wouldn't work. If there had been, calling Harry 'Sir' would have been right up there with corner time on the 'Not on your Nellie' list. Harry remained oblivious to the concept of corner time until a couple of years later, when I wrote a Fantasy Friday story that featured it. Not long after, he gave me a four o'clock appointment and told me, if he were held up in traffic and wasn't home by the appointed time, I was to wait for him in the corner between the dresser and the wardrobe. Back then, an appointment was specifically for a 'reminder' and I would wait for him in our room, sitting on the bed, bottom already bared. There was no way I was going into that corner, half-naked or otherwise, and I told him so. He said that was up to me but non-compliance would be met with the wooden paddle.

After I was up and about and had drunk enough coffee to start my day, I walked into the corner to see how it felt. I barely managed ten seconds. I tried again at lunchtime but the result was just the same. I wasn't too worried about the wooden paddle. Harry might take me over my limit for my obstinacy but he isn't a tyrant. That wasn't the real issue. I knew he would be disappointed that I'd flouted his wishes. But I couldn't do it, I really couldn't, it was just too humiliating. I was still pretty much a lurker in Blogland then but I had a good friend in Jan, our lovely English Rose, and decided to email her for advice. Unfortunately for me, she was out for the day but, as four o'clock approached and Harry wasn't home, I felt sure she would have told me to do what he wanted. Harry was only five minutes late but it felt like an eternity in that corner. Jan's email, urging me to do as he wanted, pinged into my inbox halfway through the spanking. She thought he was probably testing his power and I'm sure she was right. He's never asked me to do it since.


I don't know what prompted Harry to throw in the 'Sir' response; nor can I make sense of my strong reaction, because I am not the same person I was five years ago. Oh, yes, I'm still the same strong, intelligent, person I always was but I am now a better, happier, version of me. One who revels in her husband's assertiveness and has more respect for him than ever before. One who will say "Sir" should he require it in future.