If you've been reading here for a while you'll know that Harry finally agreed to spank me after 43 years, on the strict understanding that it would only ever be for fun. Somewhere along the line though, he became more assertive and discipline entered the mix. If I had any doubt that Harry has now truly embraced the ttwd dynamic, it was totally dispelled when he purchased two jam spoons recently. Yes, two, and not the regular kind either but the French version.

Early last month we spent a few days in France, stopping at a hypermarket on the way to our destination to buy supplies. Harry headed straight towards the wine section as I lagged behind looking at tableware. When I caught up with him he had stopped at a display of jam making utensils. In his hand was a large spoon-shaped object. It was obviously meant for stirring jam but it was flat on both sides, with no bowl, and a uniform thickness from end to end.  After tapping it in his palm he smiled and said it would do very nicely. Then he decided to take two.

I promise you I was an angel during that short break but, as we were loading the car to go home, Harry held up one of the spoons and said we'd try it out the next day. He only used it moderately for a few smacks but it left its sting, if not its mark.

I rarely get into any real trouble but I blotted my copybook a few days ago when I went on a short trip to the next village. As I picked up my bag to get out of the car, I noticed Harry's spectacles on the passenger seat. My car had been in a tight spot on our drive and he had turned it round for me, leaving his specs inside. I went to get my phone from my bag to let him know where they were and realised it was still charging on my bedside table. On my return Harry met me at the door but, instead of the usual greeting, he crooked his finger for me to follow him to the kitchen, where a jam spoon was placed prominently on the table. As he guided me across the table he said I would see a missed call from him on my phone. He had called to ask if he'd left his specs in my car and heard my phone ringing upstairs. It was a short spanking but even over jeans that thing hurt like the dickens.

I'm wondering whether I should use that photo on the lock screen of my phone, to remind me not to leave home without it again...

After reading my answers to the stolen meme, a few people expressed interest in hearing about my experience of horse riding.  I was reluctant to lay bare my ignominious defeat but, after revisiting the saga with Harry, I can see the funny side, so here it is:

Harry and I were sitting on a clifftop above a deserted beach, desultorily watching the feeble little waves breaking on the shore. No surfing that day. We were about to turn away when a posse of riders on horseback came into sight, their mounts galloping along the shoreline, kicking up spray. Harry thought it would be wonderful to do that in moonlight and there began his romantic notion of us doing that very thing.

And so it was that I came to be in a stable yard, kitted out with riding hat and boots, amongst a gaggle of pony mad little girls. The lesson started in the yard with the basics, like how to climb aboard and hold the reins. Harry mentioned to the instructor that I was a little nervous and she assured him I'd be fine with Dora, she was a placid animal and could do the exercises in her sleep. But animals can smell fear, can't they? The sweet natured horse knew I was never going to be in charge right from the start.

Then, on to the paddock, which meant putting into practice what we had learned about stopping and starting. So I told Dora to "walk on" and squeezed with my knees but she was going nowhere until the instructor came to my rescue.

The following week, we reprised the first week's lesson before moving into a bigger paddock  to learn trotting. I was doing quite well until then but Dora refused to move on to the other paddock. We'd been shown how to smack a crop against the saddle, rather than the horse, but my feeble tap had no effect. The instructor leaned over and gave her a smart tap, galvanising her into sudden movement that nearly had me off. She behaved herself for the trotting but I knew who had the upper hand and it wasn't me. To finish the lesson we were given an exercise that involved turning round 360 degrees in the saddle, using the pommel. I'm a bit hazy now on how it was done but why on Earth would anyone want or need to do that? I think I made it eventually but I can't be sure and Harry doesn't remember!

Whilst I was making my inept attempts, Harry took to horseback like a duck to water. By the third week, I was still going round in circles when, in the next field, Harry was trotting around prior to going out on a ride with experienced pupils and their instructor. There had been a mistake in the allocation of horses that morning and the only one left for Harry to ride was Jago, a spirited animal, usually only ridden by instructors. Harry was thrown off unceremoniously but got straight back on. He relished the challenge and was allowed to ride the horse from then on. Each week, Jago threw him off in a different way, until he realised Harry wasn't going to give up. 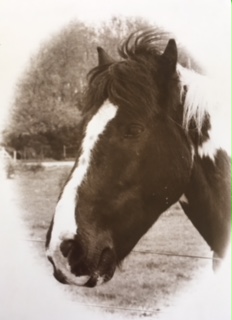 I think Dora was tired on the day of my sixth lesson because she seemed to go into the 'I can do this in my sleep' mode. Anyway, I was plodding around with a semblance of knowing what I was doing when the stable owner came along and said I must go on a ride the following week.

Placid Dora came with me on my very first proper ride. We set off nicely, trotting along the bridle path, until she decided that wasn't enough fun and bolted off the track, heading determinedly in the direction of the nearby trunk road. I pulled on the reins in vain, hanging on for dear life, until the instructor caught up and took control. On return to the yard in every previous week, one or other of the pony mad little girls had offered to take Dora from me to do whatever had to be done between lessons. That time, none of them was around and I had to look after Dora myself. I dismounted, remembering we were not to let the horses drink straight away but Dora headed doggedly for the water trough. I actually managed to stop her and leant up against her shoulder, as we had been taught. Her response was to stomp hard on my foot! My howl of anguish at last produced help and Dora was led away by someone far more competent than I.

Harry, meantime, had also returned to the yard, where he found me hopping around in pain. He led me to his car, where he removed my boot from my rapidly swelling foot. That was the last time I ever went near a horse. Many years later my mother found my boots in the back of a cupboard and gave them to my elder daughter. The left boot still bore the muddy imprint of Dora's hoof.

Harry continued to ride out from the stables until he had the news that a careless person had ridden Jago into a tree and the poor horse had to be destroyed.

He never got to realise his romantic dream but he did get to ride with our daughters who, like him, took to it with ease.

Crime on the Increase!

I've come back from holiday to find that Blogland is experiencing a crimewave. With so many partners in crime, I couldn't resist this act of felony! 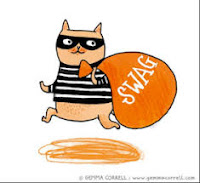 Proposals - One - but not from Harry, he never actually asked me to marry him.

Piercings - The usual one in each ear.

Shot a gun - No, not my thing but Harry has six shotguns. He and our daughters all enjoy clay pigeon shooting.

Fallen in love - Twice. I was too young the first time but then Harry came along.

Driven across country - Hell no!

Hit a deer - I was in the passenger seat of my car, with Harry driving, when a muntjac careered into our path. No possibility of avoiding it so, sadly, it died.

Ridden in an ambulance - No, thank goodness.

Sung karaoke - No, I couldn't inflict that on anyone.

Ice Skated - I've put on skates and slithered around for about 30 seconds but that probably doesn't count.

Been surfing - Harry has been a keen surfer since the late 60s, though he's had to slow down in the past few years; all that paddling out has put a strain on his shoulders. Back in the day, we had the requisite VW camper van and I was his surfer chick, hanging out with the girls whilst the men did their stuff. More women joined in over the years but I was not one of them!

Seen the ocean - many times.

Ridden a horse - When we were starry-eyed young lovers Harry had this romantic dream of us riding horses along the sea shore, so we both took lessons. He needed only two. I'd like to draw a veil over my experience; suffice to say the dream never became reality.

Punched back - See above.


Thanks to Amy for taking the rap for all this burglary, ten spanks for each felony when Eric gets home!