Harry and I haven't spent much time at home during the last couple of weeks. We've had a holiday in Spain and a visit with our elder daughter and her partner in the West Country. There's been enough spanking to keep me on my toes but nothing out of the ordinary.

So, what to blog about? Erica Scott has dusted down an old meme, which Ronnie and Eva have already borrowed, so I thought I'd have a go too. If I knew how to link to their blogs, I would but I'm still a newbie here and can barely find my way around my own site.

1. If you could meet anyone on this earth, who would it be?
Malala Yousafzai.

2. Do you sleep with or without clothes on?
Without.

3. Ever had a poem or a song written about you?
No, but Harry has written some very poetic lines in celebration cards.

4. Do you have any strange phobias?
Snow, I can't bear it.

5. Ever stuck a foreign object up your nose?
No.

6. What's your religion?
None.

7. If you are outside, what are you most likely doing?
Pottering in the garden - but not weeding the borders!

8. When was the last time you played air guitar?
Never done it.

9. How do you vent your anger?
I control my temper now but a long time ago, when I was angry with Harry, I took a
box of china that was destined for the Scouts' jumble sale and smashed it against
the wall inside our garage, piece by piece. He was out at the time.

10. Do you prefer to be in front of the camera or behind it?
I'm totally un-photogenic, so definitely behind it, though I'm not much good at it.

11. Have you ever gone skinny dipping?
Once, in the sea at dusk.

13. Do you have a collection of anything?
Handbags. Not sure how many, around 40, I think.

15. Are you happy with the person you've become?
Pretty much. There's always room for improvement, though.

16. What's the worst place you've ever been to?
A remote part of Portugal way back in the 70s. I'm sure it's much better now.

18. Do you drive? If so, have you ever crashed?
Yes. Crashed spectacularly two months after I got my first car. No one was injured.

19. What is the last book you read?
Rogue Lawyer by John Grisham.

20. What's the last movie you saw?
The Hateful Eight. It was hateful!

21. What's the worst injury you've ever had?
A slipped disc. Even childbirth without drugs wasn't as painful as that.

23. Ever had a rumour spread about you?
Yes, at school.

24. Do you tend to hold grudges against people who have done you wrong?
I forgive but I don't forget.

26. What was the last thing you purchased?
Groceries.

27. How many relationships have you had?
Anyone before Harry doesn't count.

28. Where were you yesterday?
Mostly at home.

30. What's your favourite animal?
I have a thing about elephants but, on the domestic front, I love tabby cats.

32. What do you think is Satan's last name.
Intolerance.

33. What is the single best decision you've made in your life so far?
Getting together with Harry. We disliked each other when we first met.

35. What is your current desktop picture?

37. If you could press a button and make anyone in the world instantaneously explode,
who would it be?
Too many candidates for this one.

38. You can re-live any point of time in your life. The time-span can only be a half-hour,
though. What half-hour of your life would you like to experience again?
There have been more than a million half-hours in my life. I can't possibly choose
just one.

39. You can erase any horrible experience from your past. What will it be?
Sitting at Harry's bedside for a week, not knowing whether he would live or die.

40. You have the opportunity to sleep with the music celebrity of your choice. Who would
it be?
Bryan Ferry still does it for me. I met him at a reception a couple of years ago and
have had his arm around my shoulders. I think that's as far as I'd like to go, though.

42. In your opinion, what makes a great relationship?
Truth, trust and lots of laughter.

43. What's a song that always makes you happy when you hear it?
Young Girl, I'll always love it.

44. You are at the doctor's office and she has just informed you that you have
approximately one month to live. a) Do you tell anyone/everyone you are going
to die? b) What do you do with your remaining days? c) Would you be afraid?
a) I'd tell everyone who matters.
b) Spend as much time as possible with the people I love.
c) I don't know.

45. Do you prefer talking on the phone or video chatting online?
My two daughters live a long way from me, one of them on a different continent, so
I'm grateful for FaceTime.

46. What is the meaning of life?
42, according to The Hitch Hiker's Guide to the Galaxy.

47. What would you want to be written on your tombstone?
I won't have one; I've left instructions that my body be cremated.

49. Do you have any obsessions right now?
I don't think I've ever been obsessive about anything; passionate but not obsessive.

50. If the whole world were listening to you right now, what would you say?
That the world needs more tolerance; no race or creed is supreme. It's a well-worn
phrase but - give peace a chance.


Thanks to all of you who commented on my previous post. I hope you will forgive me for not responding to each of you individually.


I have had the disc problem for about twenty years and generally manage it very well. I really don't know what came over me when I wrestled with the offending plant; I can only plead temporary insanity. The pain was terrible for a while but a combination of pain killers and gentle exercise took the raw edges off within a few hours. A week later, I still have some residual discomfort but am slowly getting back to normal. Many thanks for your good wishes.

Harry's decision to punish was borne out of concern for my wellbeing, as he waited for me to regain consciousness following my faint - the cause of which was entirely due to my own carelessness. Had he been able to spank me within a day or two, I have no doubt that it would have been a barn-burner. After nearly a week, however, he felt that too much time had gone by for a punishment spanking to be meaningful. Instead, I had a well-reddened bottom from a reset on Sunday morning.

That doesn't mean the predictions of a shift in our dynamic were wrong. The p-word has entered the Joneses' ttwd lexicon and it can only be a matter of time before Rosie's are very red indeed.

You can put that in your blog!


Harry is not very happy with me. Monday was a Bank Holiday and we were looking forward to the extra day off. It started well, a bit of a lie-in followed by a leisurely breakfast, then pottering about until lunch time. After lunch, we planned to do some work in the garden before going on to our favourite afternoon activity...

I've neglected the garden this year but it seems to have got along nicely without me. Most of my plants are in containers and just needed watering and weeding. I had nearly finished a small patio area, when I spotted a weed growing up between the slats of the wooden bench from the border behind. Several feet of it came snaking up through the seat as I pulled on it, though it still remained firmly in the ground. Foolishly, I gave it a good tug and an excruciating pain shot up my back. 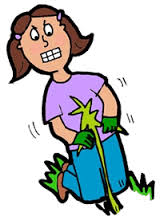 I couldn't move and Harry was nowhere to be seen. He came running when he heard me hollering and, half carrying me, managed to get me into the house and flat on the floor before I passed out. Harry knows the drill, we've been there before, though not for a while. I have a long-standing disc problem that gives me little trouble as long as I take care. Even before we started ttwd, I had a list of rules designed to keep my back pain-free. Not weeding in the borders is one of them.

Once I was settled, Harry went to clear up outside, returning with a face like thunder. He reminded me that, firstly, weeding the borders is his job, not mine. Secondly, what I had been tugging on was a sucker from a tree, not a weed. He said he'd like to spank me there and then but, obviously, I'd have to wait for my punishment. I must have looked shocked because he said, "Yes, I did say punishment, you can put that in your blog."

I'm still waiting but not for much longer. I've been diligent with my remedial exercises and should be fit again in a couple of days. Maybe Harry will remember that punishment doesn't figure in our version of ttwd. Wish me luck.


BTW, Lindy from DOWNUNDER DREAMING is suffering from back pain at the moment, through no fault of her own. If you haven't already done so, please send her some positive thoughts, she could really do with them.
Posted by Rosie Jones at 20:07 15 comments: